Preah Vihear Temple Khmer is a Hindu temple built during the reign of Khmer Empire, that is situated atop a 525-metre (1,722 ft) cliff in the Dângrêk Mountains, in the Preah Vihear province, Cambodia. In 1962, following a lengthy dispute between Thailand and Cambodia over ownership, the International Court of Justice (ICJ) in The Hague awarded the temple to Cambodia.


Affording a view for many kilometers across a plain, Prasat Preah Vihear has the most spectacular setting of all the temples built during the six-centuries-long Khmer Empire. As a key edifice of the empire's spiritual life, it was supported and modified by successive kings and so bears elements of several architectural styles. Preah Vihear is unusual among Khmer temples in being constructed along a long north-south axis, rather than having the conventional rectangular plan with orientation toward the east. The temple gives its name to Cambodia's Preah Vihear province, in which it is now located, as well as the Khao Phra Wihan National Park which borders it in Thailand's Sisaket province and through which the temple is most easily accessible. On July 7, 2008, Preah Vihear was listed as a UNESCO World Heritage Site. The temple is 140 km from Angkor Wat and 320 km from Phnom Penh.

Construction of the first temple on the site began in the early 9th century; both then and in the following centuries it was dedicated to the Hindu god Shiva in his manifestations as the mountain gods Sikharesvara and Bhadresvara. The earliest surviving parts of the temple, however, date from the Koh Ker period in the early 10th century, when the empire's capital was at the city of that name. Today, elements of the Banteay Srei style of the late 10th century can be seen, but most of the temple was constructed during the reigns of the Khmer kings Suryavarman I (1002 -1050) and Suryavarman II (1113 -1150). An inscription found at the temple provides a detailed account of Suryavarman II studying sacred rituals, celebrating religious festivals and making gifts, including white parasols, golden bowls and elephants, to his spiritual advisor, the aged Brahmin Divakarapandita. The Brahmin himself took an interest in the temple, according to the inscription, donating to it a golden statue of a dancing Shiva known as "Nataraja". In the wake of the decline of Hinduism in the region the site was converted to use by Buddhists.

The temple complex runs 800 m (2,600 ft) along a north-south axis facing the plains to the north, from which it is now cut off by the international border. It consists essentially of a causeway and steps rising up the hill towards the sanctuary, which sits on the clifftop at the southern end of the complex (120 m/390 ft above the northern end of the complex, 525 m/1,722 ft above the Cambodian plain and 625 m/2,051 ft above sea level). Although this structure is very different from the mountain temple found at Angkor, it serves the same purpose as a stylised representation of Mount Meru, the home of the gods.

The approach to the sanctuary is punctuated by five gopuras (these are conventionally numbered from the sanctuary outwards, so gopura five is the first to be reached by visitors). Each of the gopuras before the courtyards is reached by a set of steps, and so marks a change in height which increases their impact. The gopuras also block a visitor's view of the next part of the temple until they pass through the gateway, making it impossible to see the complex as a whole from any one point.

The fifth gopura, in the Koh Ker style, retains traces of the red paint with which it was once decorated, although the tiled roof has now disappeared. The fourth gopura is later, from the Khleang/Baphuon periods, and has on its southern outer pediment, "one of the masterpieces of Preah Vihear" (Freeman, p. 162) : a depiction of the Churning of the Sea of Milk. The third is the largest, and is also flanked by two halls. The sanctuary is reached via two successive courtyards, in the outer of which are two libraries.

The temple is originally known as Sreisikharesvara, which means the Power of the Mountain. The temple was built over 300 years from late 9th century till early 12th century by four kings to worship Shiva:

The king built the central tower of Preah Vihear Temple. King Yasovarman I built Yasodharapura city and preferred to build this temple on the mountaintop.

This king built a long hall next to the central tower, the rampart and three entrances. According to the temple inscription, the king prepared a ceremony to invite the god Patresvara who stay at Wat Pu (now in Lao) to stay together with the god Sreisikharevara to protect and take care of the Khmer Empire and its people.

The king built two libraries and repaired some parts of the temple.

The king built the terrace with seven-headed-nagas, statues of standing lions along the walkway, and some more naga staircases. He also prepared the inauguration ceremony for the temple and regarded it as a worship place for all kings.

Preah Vihear Temple as the World Heritage by UNESCO

As the process of Heritage-listing began, Cambodia announced its intention to apply for World Heritage inscription by UNESCO. Thailand protested that it should be a joint-effort and UNESCO deferred debate at its 2007 meeting.

Thailand's political opposition launched an attack on this revised plan (see New dispute over ownership), claiming the inclusion of Preah Vihear could "consume" the overlapping area of the dispute lands. In response to the political pressure at home, Thailand withdrew its formal support for the listing of Preah Vihear Temple as a World Heritage site.

Cambodia continued with the application for World Heritage status and, despite official Thai protests, on July 7, 2008 (July 8 in Cambodia), Preah Vihear Temple was inscribed on the list of World Heritage sites.

The renewed national boundary dispute of 2008 has been a reminder that despite the World Heritage ideals of conservation for all humanity, operating a World Heritage site often requires use of national authority at odds with the local cultures and natural diversity of the landscape. Prior to listing, Cambodia considered Preah Vihear part of a Protected Landscape (IUCN category V) defined as "Nationally significant natural and semi-natural landscapes that must be maintained to provide opportunities for recreation." However, Category V is generally defined as "Land, with coast and seas as appropriate, where the interaction of people and nature over time has produced an area of distinct character with significant aesthetic, cultural and/or ecological value, and often with high biological diversity. Safeguarding the integrity of this traditional interaction is vital to the protection, maintenance and evolution of such an area."

During the People's Alliance for Democracy's siege and occupation of Suvarnabhumi Airport, future Thai Foreign Minister Kasit Piromya reportedly said "I will use Hun Sen‘s blood to wash my feet," recalling the historic incident where King Naresuan of Siam did the same to King Lovek of Cambodia. In a 2008 television interview, he called Cambodian Prime Minister Hun Sen "crazy", a "slave" (of Vietnam), and a "nak leng" (commonly translated as "gangster").

In 1994, Thailand held a World Heritage proposal conference in Srisaket in which the local cultural traditions were considered along with monuments like Preah Vihear that stimulate more nationalistic sentiments. The use of passes in the Dongrak Mountains reportedly tied together cultural communities and practices divided by a militarized (and imperfectly demarcated) modern border line. A Mon-Khmer ethnic minority, the Kui or Suay (the ethnonyms have multiple spellings), used the passes to hunt and capture elephants in the forests below the Dongrak cliff edge, including the Kulen area which is now a Cambodian wildlife sanctuary. Kui in Cambodia were skilled ironsmiths using ore from Phnom Dek.

While elephant hunting in the vicinity of Preah Vihear was touched upon in the International Court of Justice proceedings, the World Heritage plans overlook local culture and species protection to facilitate national revenues from tourism. One international law professor has urged that practicality calls for laying aside exclusive sovereignty in favor of an "international peace park. A scholarly article concurs in concluding: "Since Thailand and Cambodia have brought only blood and bitterness to this place, it might be desirable to preserve it from both. It could be given back to nature and the indigenous peoples, to be managed cooperatively between the two governments in equal partnership with local communities, as a trans-border Protected Landscape-Anthropological Reserve (IUCN category V and old category VII)”.Given the massing troops in 2008, perhaps such a trans-border reserve would create not only a demilitarized buffer zone in which any future demarcation can be amicably undertaken, but a recognition of the added ecological and cultural aspects of an area which both Cambodia and Thailand may still save from the destructive and exploitative impacts of rapid development so often suffered in other ASEAN countries.

Disputes over ownership since 2008

Main article: Cambodian–Thai border dispute.
The ongoing conflict between Cambodia and Thailand over the site has led to periodic outbreaks of violence.
A military clash occurred in October of 2008.In April of 2009, 66 stones at the temple allegedly were damaged by Thai soldiers firing across the border. In February 2010, the Cambodian government filed a formal letter of complaint with Google Maps for depicting the natural watershed as the international border instead of the line depicted on the 1907 map used by the International Court of Justice in 1962.

In February 2011, whilst Thai officials were in Cambodia negotiating the dispute, Thai and Cambodian troops clashed, resulting in injuries and deaths on both sides.

Since February 4, both sides have used artillery against each other, and both blame the other for starting the violence. On February 5, Cambodia had formally complained in a letter to the U.N. "The recent Thai military actions violate the 1991 Paris Peace Accord, U.N. Charter and a 1962 judgment from the International Court of Justice", the letter claims. On February 6, the Cambodian government claimed that the temple had been damaged. Cambodia's military commander said: "A wing of our Preah Vihear temple has collapsed as a direct result of the Thai artillery bombardment". However, Thai sources spoke only of minor damage, claiming that Cambodian sources had fired from within the temple.

ASEAN, to which both states belong, has offered to mediate over the issue. However, Thailand has insisted that bilateral discussions could better solve the issue. On February 5, the rightwing People's Alliance for Democracy called for the resignation of Prime Minister Abhisit Vejjajiva for failing to defend the nation's sovereignty. 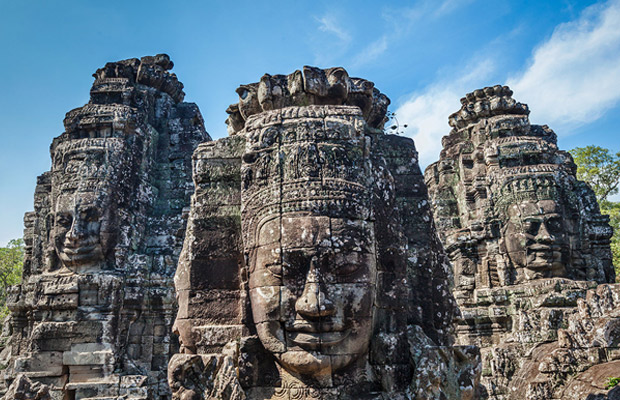 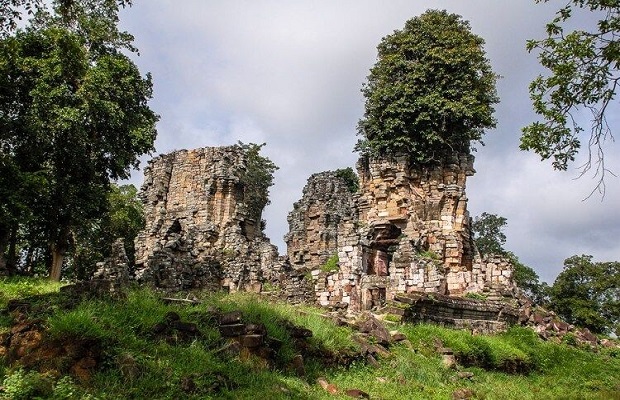 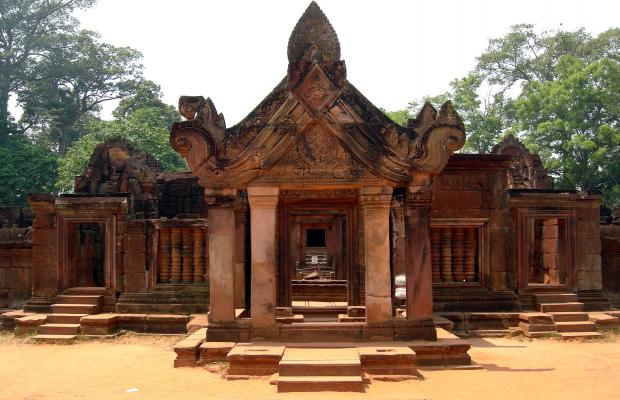 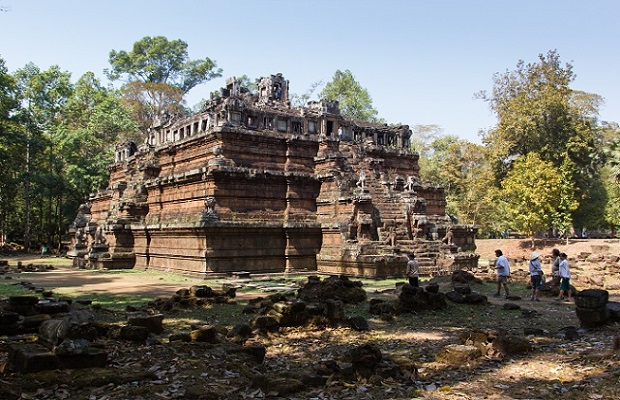